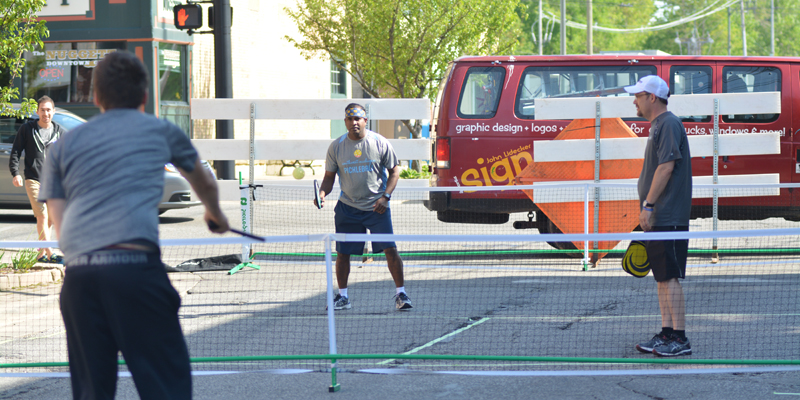 Businesses are providing positive reviews of the first Third Thursdays event hosted May 19 in downtown Niles.

“I think it went really well and it will only get better,” said Lisa Croteau, of Niles Main Street/DDA. “I was really excited with the participation from the businesses and the community. I can’t wait to see what happens in June.”

Croteau said the participating businesses would get together soon to discuss what worked, what didn’t and what could be changed to improve the experience for businesses and customers.

Olfactory Hue Bistro owner Daysha Amster, who helped spearhead Third Thursdays, said everyone did an amazing job working together and promoting the event. More than 25 businesses participated in the event, offering specials and staying open during the 5 to 9 p.m. window.

“Tons of foot traffic, beautiful weather, happy customers, happy business owners,” she said. “ I am so proud to be a part of our amazing supportive community.

“It was the first one and I think it was a great success. I remember our first car club in 2012 we did $60 in sales. We stuck with it and promoted as much as possible staying positive, working with other organizers, and by the end of the last car clubs on Main Street we were up 300 percent by 2015 — the summer before the bridge was out. I see so much value in this event.”

Amster also pointed out that she received a handful of late-arriving customers who said they were at the Girls on the Run 5K event in Berrien Springs Thursday, which may have kept some people from attending Third Thursdays.

The Brass Eye cocktail lounge owner Bryan Williams said his business did very well and that he’s been offering specials on the Third Thursday of the month for the past nine months with great success.

“This one was only slightly busier for us than normal but there was still an increase in sales. Overall I think it was a great success. It was nice being part of a city that was open after 5 or 6 p.m. for a change. It felt alive,” he said, adding that the key to any successful business is being open. “Even if you get rule No. 1 right (location, location, location) it doesn’t matter if you aren’t open enough hours for people to shop.”

SLR Pilates offered 10 percent off its full-priced packages all day. They could be purchased in store or online. Owner Stephanie Reno said while she hadn’t had a chance to break down the sales numbers yet, she believes she sold more than on a typical day.

“We sold a lot of the special that we were running and it was packed out in front (on Second Street where the street was closed for beer sales and a pickleball court),” she said. “I think it will be huge once we get going with it and keep adding more things to it. It was great for the first one.”

Croteau said she would survey each participating business about how the event went and use the results to create a baseline in order to measure the success of future Third Thursdays.

She said to her knowledge there weren’t any major problems during the first event, although she heard some customers complaining that they did not get a stamp on their bingo card, which tracks how many businesses at which a person spends money on Third Thursdays. Once a bingo row is filled out, the card can be turned in for a chance to win $100 in downtown dollars.