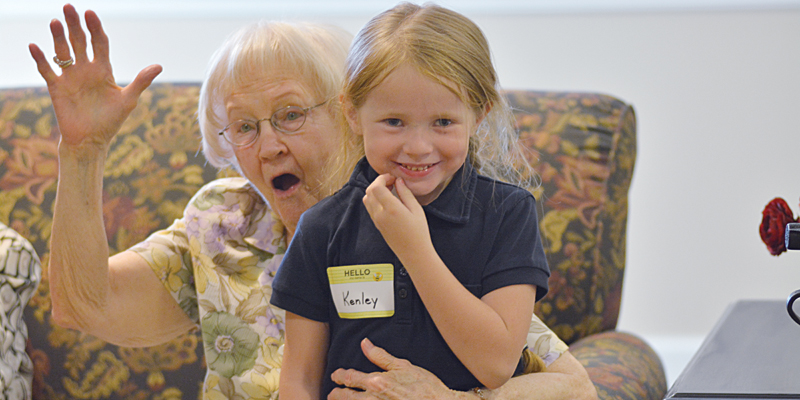 Ninety-one-year-old Frances White had a sticker on her walker of a smiling gold trophy, which was placed next to another sticker of the iconic “D” of the Detroit Tigers — her favorite Major League Baseball team.

White has numerous Tigers team memorabilia displayed outside her apartment at Woodland Terrace Assisted Living Center in Niles, so it is safe to believe her when she says she’s a big fan.

White said she is proud of her gold trophy sticker, which was won in a game of mathematics bingo played with kindergarteners from Bonnie Prenkert’s class at Eastside Connection School in Niles.

“When I won that’s what you get — a sticker — and they wanted to help me pick it out,” White said, adding that one of her favorite parts of the day is getting hugs from the students as they line up to get on the bus. “One of the girls came and gave me a hug … then everybody had to have a hug. I didn’t know if the boys would, but boy they weren’t going to let the girls get ahead of them. They wanted a hug too.”

Placing the newest generation among the generation with the most life experience at Woodland Terrace for four hours each Wednesday for six weeks was a project dreamed up by the Eastside teacher when she learned that many of her students either did not have grandparents or did not have close relationships with them.

Although separated in some instances by a gap of 80 years, the two age groups developed easy friendships that Prenkert said could last much longer than the life of the project.

“My hope is that our learners will continue to visit the residents that they have gotten to know,” she said. “This has become a valuable lesson for everyone from our parents to the administrative teams to the residents and the learners.”

With the help of several parent volunteers, Prenkert’s 23 kindergarten students went about their normal daily lessons in math, reading and writing. The only difference was the inclusion of the Terrace residents, many of whom became regular participants in helping their new “grandchildren” make the most of the experience.

The students even made crafts to give to their new “grandparents,” including paper kites, butterflies and birds that could be seen displayed on the outside of the residents’ doors throughout the facility.

Kindergartner Elizabeth Haden said she and her classmates get excited on the morning before each visit, and look forward to their next visit the rest of the week. She said she developed a close bond with a resident she calls ‘Ms. Frannie,” whose real name is Fran Aalfs.

Prenkert said the young-meets-old experience, which is rooted in the school’s model of project based learning, is known as intergenerational learning. Fewer and fewer children, she said, are growing up with a grandparent in the home, which means they are missing out on the experience of learning from someone with the viewpoint of growing up in a generation different from theirs or their parents.

The goal was to develop stronger connections between the generations through engaging learning centers and activities.

“It’s been a fantastic experience for everyone involved,” she said. “It’s been an eye opener for the children. They’ve learned from the residents different skills in life, manners at lunch. Little things like putting a napkin on your lap and how to have a conversation. It’s been great.”

Prenkert thanked school administration and those involved with running Woodland Terrace for helping make the project happen. She said she hopes to continue it next year.

The Eastside class invites the public to see what they learned during an open house from 6 to 7 p.m. May 25 at Woodland Terrace. Social time will follow the program.