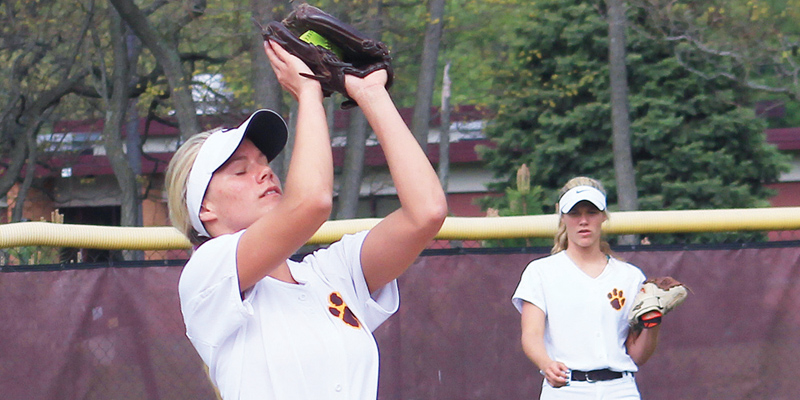 Brandywine senior Makenna Hartline is making a strong bid to be an all-state softball selection for the first time in her career.

Through 22 games, Hartline was batting .597 with six homers and 26 RBIs. She has also walked 16 times and stolen five bases.

The Comstock softball team saw up close what kind of year Hartline is having on Tuesday. In game two of a doubleheader won by the Bobcats, 10-5, Hartline hit a grand slam to give her team a 4-2 lead and added an RBI double and single from her lead-off spot.

“The last couple of years what has held her out of being an all-state contender was her hitting,” said Brandywine softball coach Ron Hartline, who is also Makenna’s father. “She just couldn’t break that .400 mark. They really expect you to have a .400 to .450 average to be considered for all-state. She’s been right around in there. The girls she’s gone up against have had .470 to .500 batting averages.

“I think she has a good chance to be all-state this year if she keeps on the same pace she’s on now.”

The grand slam against the Colts was the second of the year for Makenna. It was a clutch hit for Brandywine, which took a lead for the first time in the doubleheader. Comstock won the opener, 10-3.

“It feels pretty cool,” Makenna said about hitting the grand slam. (In the doubleheader) I just focused on not dipping my shoulder and making contact with the ball.”

In game one, Makenna singled, walked, flied out to left field and hit a hard line drive to center.

“She draws a lot of walks, which affects her batting average,” Ron said. “But this year, she’s really putting the bat to the ball.

“When she first hit (the grand slam) I didn’t think it was a homer, but then it didn’t start coming down then I knew it was going to leave the fence.”

Makenna has also been stellar defensively at shortstop. She had 15 fielding chances against Comstock and didn’t make an error.

Her best glove work might have come in the seventh inning of game two when she snabbed a hard hit line drive going to her left.

“I just stuck my glove up and I got the (ball) in the palm of my glove,” Makenna said.

Makenna will join her twin sister Michaela next fall at Trine University and play softball. Michaela, who plays center field, has been an all-state selection twice for softball.

Makenna would like to see two Hartlines be thought of as being elite high school softball players.

“It would be pretty nice to make all-state for softball,” Makenna said.