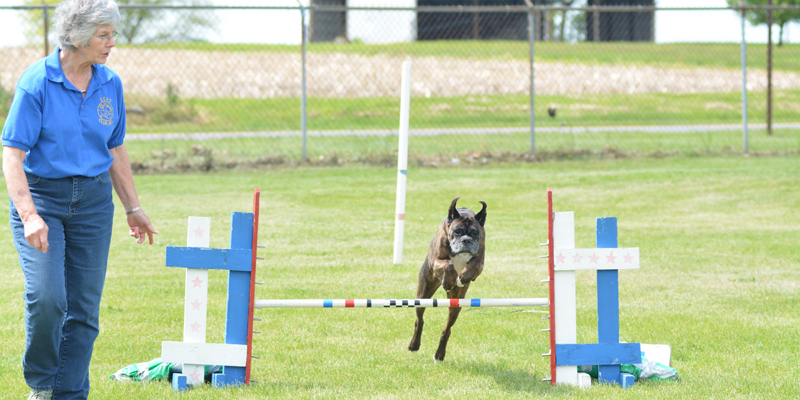 Leader photo/CRAIG HAUPERT — Ellen Gruber, of Niles, leads her Boxer, Maddie, over a jump at the ECHO Club’s agility course in Buchanan. The club will celebrate its 50th anniversary Saturday with a free open house, including agility demonstrations and door prizes.

Ellen Gruber likes to say she doesn’t need a boat to gamble. She’s got something better — dog agility competitions.

The Niles resident says her two boxers are at a high enough skill level that any mistake would result in an automatic disqualification during the agility events she enters them into around twice a month.

“If they sneeze at the wrong place — that’s it,” she said. “That’s my gamble. It is so much fun, especially when they have a fantastic run. I imagine it is like being an athlete and knowing you crossed the finish line first.”

It would make sense, then, that Gruber is the president of the ECHO Club, a Buchanan-based dog agility and obedience club.

It has 50 members ranging from people who take the craft as seriously as Gruber to others who just want to see some improvement in their animal’s behavior.

The public will have a chance to see what the club is all about during an open house celebration of its 50th anniversary from 10 a.m. to 3 p.m. Saturday, May 21, at 457 Post Rd. in Buchanan. Club members ask that attendees leave their pets at home. The event is free and includes a variety of demonstrations, door prizes and information about the club.

Gruber said she is proud to see the club reach the 50-year milestone.

“It is huge because there were times when I first joined (in the early 1990s) that we talked about not having shows anymore,” she said. “It was like, ‘are we going to continue this or not?’”

The ECHO Club was originally known as the Elkhart County Obedience Club (ECHO) because it began in Elkhart County in 1966. After moving around the Michiana area for several years, the club has been at its current location on Post Road since December 2000.

Gruber said it is primarily a dog obedience and dog agility training facility, but has members involved in many different kinds of dog activities from pet therapy to tracking, herding and water rescue.

“Mostly we enjoy our dogs and working with people who have the common interest,” Gruber said. “We all just have a love of dogs and are interested in training them in all sorts of areas.”

ECHO is licensed to hold United Kennel Club (UKC) trials in obedience, rally, agility and conformation. Many of its members, like Gruber, enter shows around the country.

For more information, visit the ECHO Club online at echodogclub.org and on Facebook.