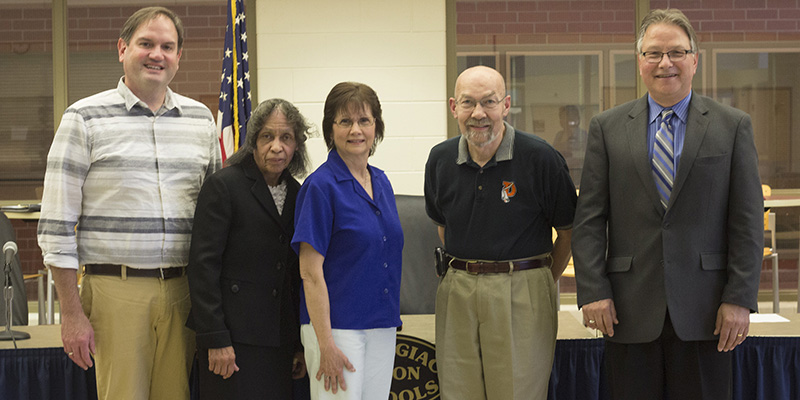 The Dowagiac Union Schools Board of Education honored five of the district’s educators who are retiring at the end of school year next month. Recognized were, from left: Steven Mast, Mary Starling, Judy Swisher, Mike Petersen and David Joling. (Leader photo/TED YOAKUM)

While impossible to quantify the differences they have made in the lives of local children, some simple arithmetic can determine the combined number of years the five educators honored by the Dowagiac Union Schools Board Education Monday have given to the future of the community.

One hundred and forty-one years, to be precise.

“That’s a lot of years…and that’s thousands of kids, thousands of students you had an impact on,” said Superintendent Paul Hartsig. “It’s amazing. It’s fantastic. It gives the rest of us in the audience hope.”

Hartsig and other leaders with the district recognized the years of service the educators, all of who are set to retire at the end of the school year next month, poured into the youth of Dowagiac during the board’s regular meeting that evening at Dowagiac Middle School.

The retirees were given a chance to introduce any family in attendance and to talk about their careers with the district before Hartsig presented them with a retirement gift, a decorative bell.

Honored that evening were:

Starling has worked with the district for more than 36 years, beginning as a lunch aide with the former McKinley Elementary School before coming over to Patrick Hamilton.

“I love working with children,” Starling said while talking about her time with the district. “That was my goal, working with the children. I had five of them back home — and when you have five kids you HAVE to love children.”

Swisher has worked as an administrative assistant with the district for 26 years. She began her tenure at Dowagiac Union High School, where she worked several years in the guidance office before moving over to the front desk. She has worked at Sister Lakes for the past 12 years.

Petersen has worked with the district for 17 years, 12 years working with the sixth-grade music program and five years as a band assistant. He has a total of 47 years in education overall, working with four different school districts.

“I would like to thank the board and the staff for the honor and privilege of allowing me to work with Dowagiac’s students for so many years,” Petersen said. “It’s been a wonderful part of my life. I love music, I love band and love the students.”

Joling has worked as an educator with Patrick Hamilton for the past 37 years. A longtime resident of Kalamazoo, Joling said he estimates he has spent a combined year and a half worth of time commuting between the city and Dowagiac throughout his career.

“It’s been a wonderful teaching career,” he said. “I thank the district for keeping me here for 37 years. I thank my former students…I thank the staff who I’ve taught with and the wonderful administrators I’ve had.”

Mast has worked with the district for 25 years, teaching at every building with the exception of Union High School and Justus Gage Elementary.

“It’s been great working here, but I’m looking to what happens next,” Mast said.

Hartsig also recognized Amy Lowe, a special education teacher at Dowagiac Middle School, for her impending retirement, who has 40 years with the district, he said. She was not able to attend Monday’s ceremony.