Though the subject of their works may be vastly different, authors Mardi Jo Link and James Lenfestey have had the direction of their respective careers decided by a single crucial decision.

For Lenfestey, it was the choice he made nearly 20 years ago when he decided to leave his long-time job as an editorial writer with the Minneapolis Star Tribune to strike out on his own to become a poet and author.

“As a journalist, you deal with the outer world, and we should,” Lenfestey said. “My job as a journalist is to arrange the facts as I find them, and arrange them in a story that makes sense to the reader…but one of the things I know, and one of the reasons I left the journalist’s path, is because there were a whole other set of facts I couldn’t report on. There’s a blood–brain barrier between the facts of the outer world and inner world — but you know that you have them. Where’s your joy located? Your ecstasy, your grief, your hope? Those are words that describe your inner you. The world of poetry is the effort to describe the facts of the inner world, the things you can’t get in the paper but are just as essential to our life as the food we put on our plate.”

For Link, her choice came when, at the behest of a high-powered New York literary agent, she decided to become a memoir writer after years of creating true crime novels about several infamous Michigan murder cases.

However, after years of working as crime novelist and journalist, she knew the transition would not be an easy one.

“I went to journalism school, I was a reporter, and wrote those true crime books — but no where any of that is the letter ‘I,’” Link said. “When you write journalism, unless you’re on the editorial page, you don’t talk about yourself or your feelings or what you think or what you’ve been through or your opinions. The point is ‘just the facts, ma’am.’”

In spite of her initial apprehension, the raging success of her first memoir, “Bootstrapper: From Broke to Badass on a Northern Michigan Farm,” has set her down the path of introspective writing for the foreseeable future, she said.

The authors’ paths crossed Saturday night at the Dale A. Lyons Building theater on Southwestern Michigan College’s Dowagiac campus, as the two were the featured writers of this year’s Dogwood Fine Arts Festival. The two both shared tales from their years in literature as well answered a few questions from the audience and event master of ceremonies, local radio personality Joe Jason.

Lenfestey, a native of Wisconsin and current resident of Minnesota, shares a strong connection to Michigan, as he and his wife reside in Mackinac Island every summer, with the author serving as the poet in residence of the famed Grand Hotel. Since becoming a poet in the late 90s, he has published several collections of poems and essays, including “A Cartload of Scrolls: 100 Poems in the Manner of the T’ang Dynasty Hermit Poet Han-Shan,” “Into the Goodhue County Jail: Poems To Free Prisoners,” and “Low Down and Coming On: A Feast of Delicious and Dangerous Poems About Pigs.”

One of the questions Lenfestey fielded during his talk was about the work he has done over the years giving poetry lessons to prisoners of prisons and jails. According to the poet, the work is very important to him because although he can’t physically free them, though his poetry he can free their minds and emotions, he said. Many times, even a short one-hour sessions with a group of otherwise-imposing looking criminals breaks down emotional walls, resulting in them shedding tears as they open up about the trauma many of them have experienced throughout their lives, Lenfestey said.

“Whatever crime that got them in there, that I can’t fix. That’s the prosecutor’s issue,” Lenfestey said. “But when they walk out the door, what kind of human are they going to be. That’s what it is about.  I give them this prompt to do it, and it’s been amazing.”

As for what his next projects will be, Lenfestey said his latest book, an anthology of 2,500 years worth of poems about bees, is slated for publishing in June. He is also working on a collection of poems about his relationship with his wife, he said.

Link also has a strong Michigan connection, being a native of Detroit, and resident of Traverse City. She is the author of three true crime novels “When Evil Came To Good Hart,” “Isadore’s Secret,” and “Wicked Takes The Witness Stand.” In addition to “Bootstrapper,” Link wrote a second memoir “The Drummond Girls,” which was published last year.

Link also answered several questions during the talk, including if whether or not writing about her personal experiences with she and her children ruffled any feathers in her family. Although her children were largely fine with what she wrote, Link said her parents were a little put off at first, she said.

“But now, I’ll let them know that ‘hey I’m stopping by’ and my mom will say ‘make sure you bring a couple of books because the neighbors want them,’” Link said. “They’ve become a sort of book seller for me.”

As what’s next for her, Link said she is currently engrossed with studying her family genealogy, and is hoping to eventually turn some of the interesting stories she’s learned in the process into a story. She has also recently dabbled in fiction writing, having recently published a short story in an anthology comprised of works from fellow Michigan writers. 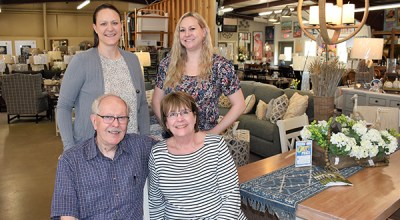