Chieftains split with Bucks in softball

The visiting Chieftains won the opening game 8-4. The Bucks rebounded to win the nightcap 14-4 in five innings.

“We haven’t been playing real good softball lately,” Dowagiac coach Mike Behnke said. “I thought we turned the corner in the first game but then didn’t play well in the second. We have to get at little things like throwing and playing catch. We’ve given away too many outs lately because we cannot throw and play catch well. Softball is a funny game and we just have to refocus and get back on track starting tomorrow at practice.”

Dowagiac’s Alyssa Allen who had two extra base hits in the opener. She doubled in the third inning, singled in the fifth inning, and homered in the seventh inning.

Taylor Hulett recorded the win for the Chieftains. She allowed four runs over seven innings. She struck out eight, walked four and surrendered nine hits.

Mickie Kiggins and Allen, who teamed up for six hits and seven RBIs, sparked Dowagiac.

The Chieftains never surrendered the lead after the third inning, scoring four runs on a two-run double by Allen and two singles.

Dowagiac matched its two-run fourth inning with two more in the seventh. In the fourth, the Chieftains scored on a two-run home run by Amiyah Smith, plating Megan Huey.

Two Buchanan runs crossed the plate in the bottom half of the fourth, making the score 6-2.

An error and an RBI single by Emma Schmidt set off Buchanan rally. Dowagiac stopped the rally after Taylor Hulett got Samni Luzadre to ground out.

Two runs in the bottom of the fifth helped Buchanan close its deficit to 6-4.

In the nightcap, Marissa Dodd went 2-3 for the Chieftains.

Buchanan was sparked by Schmidt and Luzadre, who teamed up for six hits and six RBIs.

Megan Soderbloom ended up on the wrong side of the pitching decision, charged with the loss. She allowed eight runs in two innings, walked three and struck out four.

Buchanan never trailed after scoring two runs in the first on.

Buchanan added six more runs in the bottom of the second. The inning got off to a hot start when Luzadre singled, bringing home Florey and Jayla Bibbs.

Three runs in the top of the third helped Dowagiac close its deficit to 8-3. A wild pitch, a wild pitch, and a wild pitch fueled Dowagiac Chieftains Varsity’s comeback. Buchanan stopped the rally after Ali Kyles got Allen to ground out.

Dowagiac scored one run in the top of the fourth to cut its deficit to five. 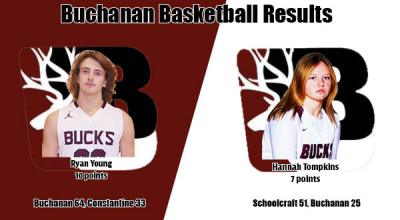