Brandywine comes up short against Homer

Marquise Davis goes up for a dunk in Brandywine’s 55-52 loss to Homer in the Class C regional semifinal Monday. (Leader photo/AMELIO RODRIGUEZ)

The Trojans defeated the Bobcats 55-52 to advance to Wednesday’s championship game against undefeated Kalamazoo Hackett.

Brandywine (18-6) was without sixth-man Brady Duval, who was sidelined with mononucleosis, and had several other players who according to coach Nathan Knapp were fighting “flu-like” symptoms.

But the Bobcats gave it all they had before fading at the end.

Homer (16-8) scored the game’s final nine points to pull out the victory.

“I don’t know if we ran out of gas or what,” Knapp said. “Not having Duval hurt. The kids are all battling some kind of flu symptoms. I just know it wasn’t us.”

Brandywine got off to a great start as the Bobcats scored the game’s first seven points.

But in a harbinger of things to come, Homer battled its way back into the game behind the play of Brock Ridgeway, who finished the night with a game-high 26 points.

Brandywine was able to open up a small lead throughout the contest, but could never put the Trojans away.

Down the stretch, a six-point Brandywine lead was not enough.

After Vinny Peel’s basket made it 52-46 with 3:03 remaining in the contest, Homer started its game-winning run.

A Brandywine turnover led to a Cody Drumm Tunner basket and then Cayden Konkle scored six the next six points in 46 seconds to give the Trojans a 54-52 lead.

Ridgeway capped the scoring with a free throw with 12.6 to play.

Brandywine had one last crack at tying the game, but Hunter Slaughter’s 3-point shot was off the mark at the buzzer.

In the end, Brandywine can look at its free throw shooting as one of the keys to the loss. The Bobcats, who were 1-of-8 in the first half, finished the game 4-of-13.

Slaughter led the Bobcats with 18 points, while Peel added 15 and Austin Knapp 10.

Ridgeway was the only Homer player in double figures. Konkle finished with eight points.

“The kids played hard,” Nathan Knapp said. “I told them this loss is going to hurt, especially tomorrow (Tuesday). But before you start thinking about all the bad, remember what you achieved this year. You were 7-1 against Class B schools. You shared the conference. You won a district and a holiday tournament. You are a good ball club. You played hard and my hat’s off to you.” 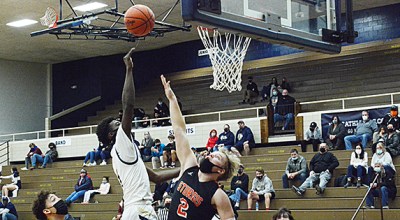