Razzano to walk-on at Michigan State

Edwardsburg senior Dante Razzano announced last week — in front of family, coaches, teammates and friends — that he will be a preferred walk-on at Michigan State University this fall.

Razanno, who is a three-sport standout for the Eddies, started at quarterback for Edwardsburg the past three seasons and helped guide the Eddies to a 30-4 record and an appearance in the Division four state semifinals his junior year.

Razzano said the Spartans will be looking at him as a defensive back.

Over the past two seasons, the 6-foot-2, 195-pound defensive back recorded 88 tackles and nine interceptions.

“This is really special to me,” Razzano said. “Today is really a dream come true for me. Although I am not going be on scholarship, I am one of those guys who is going to have to work my way up the totem pole. When I came in here as a freshman I was the low guy on the totem pole and had to work and work and work and you finally get to where you want to be.”

Razzano is no stranger to Michigan State as his brother Dominic is a senior and his sister Catie a sophomore in East Lansing. His father, Dave, and mother, Lori, also went to Michigan State.

He is also pleased to be giving the Edwardsburg football program some state-wide recognition.

“This is such a great program and such a great town and school and it really means a lot to be able to give this program the proper exposure it deserves. It has been one of the best programs on this side of the state for the last five years.”

Razzano will not be the only southwest Michigan player in the Michigan State camp this fall. 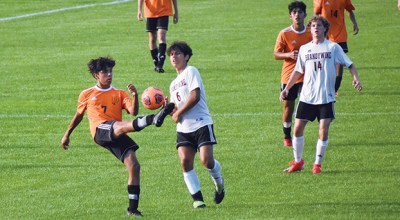