Midwest Energy, as part of its $30,476.20 Strengthening Schools grant, awarded Ross Beatty Jr./Sr. High School $2,000, which will be used for student-run art classes.

A total of 89 applications evaluated and scored by co-op members totaling more than $156,000. The committee then determined without knowledge of the school, district or community, the final amount of the awards.

The committee included Della Bundle of Cassopolis, Kathye Herrera of Morenci and Melisa Shafer of Edwardsburg.

Along with Cassopolis, Dowagiac Middle School and Dowagiac Union High School received grants totaling $2,459.90 for Sphero and Galaxy tablets and $1,300 for the Greenhouse Club respectively.

“It’s heart wrenching to not be able to give to every school, but wonderful that through true community spirit, we help bridge the gap where budgets fall increasingly short,” Bundle said, reflecting on the process after serving a second year on the committee. “For me, being a co-op member equaled being a satisfied customer, but when I joined this effort, my status changed from consumer to champion.”

Shelly Johnson, who teaches art at Ross Beatty, said the money will be used to purchase iPad minis.

“We need technology in the classroom for student use,” Johnson said. “I have been working on a video class with junior high kids. So basically, supplies are free except for the technology, which we did not have.”

Johnson said that during the class, students were using their phones, which had both Apple and Android technology and some students did not have access to smart phone technology.

“It is technology that is student-used, but I can control it,” she said.

Unlike painting and drawing, video is a performance art according to Johnson.

“When they are creating videos, it can be as simple as stop-action or it can be an actual performance video. So it is art. It is a visual art, but it is a performance art.”

The class is currently available only to junior high students.

Students can contact Johnson at sjohnson@cassopolis.org for more information. 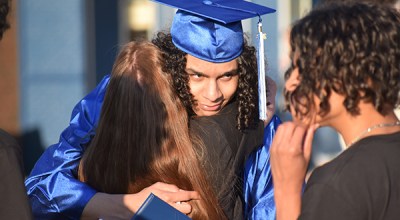 Cassopolis Class of 2022 graduates with spirit of resilience – with GALLERY