The Cassopolis Board of Education approved the termination of the business services agreement and decided to hire a full-time business manager at its regular meeting Monday night.

The board voted 6-0 to terminate the shared services with the Lewis Cass Intermediate School District. Trustee Jesse Binns was absent from the meeting.

The district will now begin the process of hiring Rebecka Smith, who has been working with both Cassoplis and the ISD.

“We are going to begin the process of terminating our contract with them, which is a 90-day out,” Cassopolis Superintendent Tracy Hertsel said. “We are in a better position and we have a quality person here we are using, so we are just going to hire her outright.

“The other part of that is with the upcoming spring schedule, with the bond and all the things going on there, we have two open contracts to negotiate and we also have RFPs (request for proposal) on custodial and copier services. So her services will be needed full-time instead of four out of five days a week.”

Hertsel said he feels that the district more than got its money’s worth from sharing a business manager, but is now in a position that it will need her undivided attention.

“Our financial stability has greatly improved from that,” he said. “In that we have the accounting, which is spot-on. Everything has headed in a positive direction since we went under that agreement. It is just that our need is more now with so many projects coming up, so it is the best thing to do.”

Hertsel also talked to the board about the easement for a public sidewalk from the Village of Cassopolis to Ross Beatty Jr./Sr. High School.

“Last year some time they had secured a grant to go ahead and connect a sidewalk from below Community Mills all the way out to Ross Beatty,” he said. “They did not meet the criteria and were not given the grant money. But it came back around and it kind of changed and they do meet the criteria. So they are back on track. Basically what the village is asking from us is an easement to put that sidewalk into the high school, which would be just across the front of Ross Beatty’s property.”

• The board discussed an overnight trip for the advanced art class to Chicago.

• Heard a presentation on Jobs for Michigan Graduates.

• Recognized the board as part of Board of Education Appreciation Month. 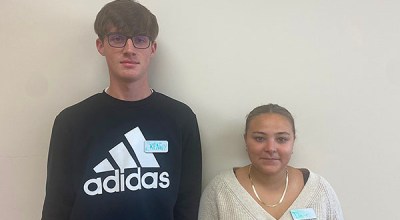