The Panthers took the first game 7-5, while the Chieftains won the nightcap 8-3.

“We played well against a very good Watervliet team,” Dowagiac coach Mike Behnke said. “They can really hit the ball and it showed tonight, but Megan (Soderbloom) was able to keep them off balance in the second game and shut them down while we built a big lead.”

Soderbloom struck out 10 and allowed three runs on seven hits in the nightcap.

“Our bats started to come alive tonight especially late in game two,” Behnke said. “We have talked about getting that big hit with runners on base and having the confidence to do so and we did that in game two.”

Hulett suffered the loss in the opening game.

Megan Huey, who also doubled in the second game, had a double and two RBIs in the opener. 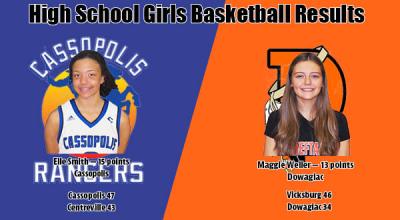 Brandywine 16-0 after win over Kalamazoo Hackett