The Village of Cassopolis hopes it has found a new manager with the energy and know-how to help the community find its niche and revitalize downtown.

After interviews with five finalists for the village manager position Wednesday, the village council decided to offer a contract to Meg Mullendore-Cluckey, who resigned as the manager of the City of Buchanan in July.

The council voted 5-2 to offer Mullendore-Cluckey a $55,000 contract. She had not been contacted about the offer as of press time. If she accepts the position, she will enter into contract negotiations with the village.

Trustees Tex Sheteron and Leon Gilliam voted against the motion. Both agreed she is the ideal candidate but had concerns about the amount of money being offered and whether Mullendore-Cluckey would move to Cassopolis or stay in Buchanan.

Mullendore-Cluckey told the council during her interview that she has an upside-down mortgage on her house in Buchanan, which would make it hard to relocate.

“As soon as that turns around, I would move here,” she said. “It’s important to live in the community and know who you’re working for — both the board and the residents. I want to be at community events and activities.”

Trustee Dianna McGrew said she liked Mullendore-Cluckey’s energy and enthusiasm, adding she would bring new ideas and a fresh perspective to Cassopolis.

“It hard to say anything about a downside for Meg,” Gilliam said.

Mullendore-Cluckey brings more than 10 years of experience in the public sector to the table, including about five years as city manager of Buchanan. She also worked in the engineering department for the City of Grand Rapids for two years, after working as an associate planner at West Michigan Shoreline Regional Development Commission for two years.

During her interview, Mullendore-Cluckey described herself as “tenacious, enthusiastic and persistent.”

She also stressed her certification as a labor relations professional, her experience in public works, grant writing, bonds and putting together budgets.

Some of her bigger accomplishments in Buchanan were water and sewer bond projects of $6.1 million.

She also talked about her involvement in the revitalization of downtown Buchanan. The city’s downtown went from 50 percent vacant to just 10 percent vacant during her tenure as city manager.

That fact was not lost on the village council, which wants to see the vacant buildings in downtown Cassopolis filled.

Mullendore-Cluckey said Cassopolis has a “good structure” already in place and appreciates its history.

“You have so much to build on,” she said. “Cassopolis has so much potential just waiting to be realized.”

Trustees told the finalists they were looking for a manager who will live in the community and make himself or herself known to residents and business leaders.

The council is also looking for a manager to “find a niche” for Cassopolis and help make it a destination.

“We have two major highways that come through,” McGrew said. “But they have no reason to stop.” 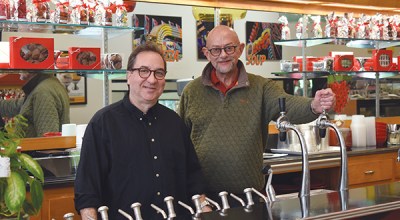